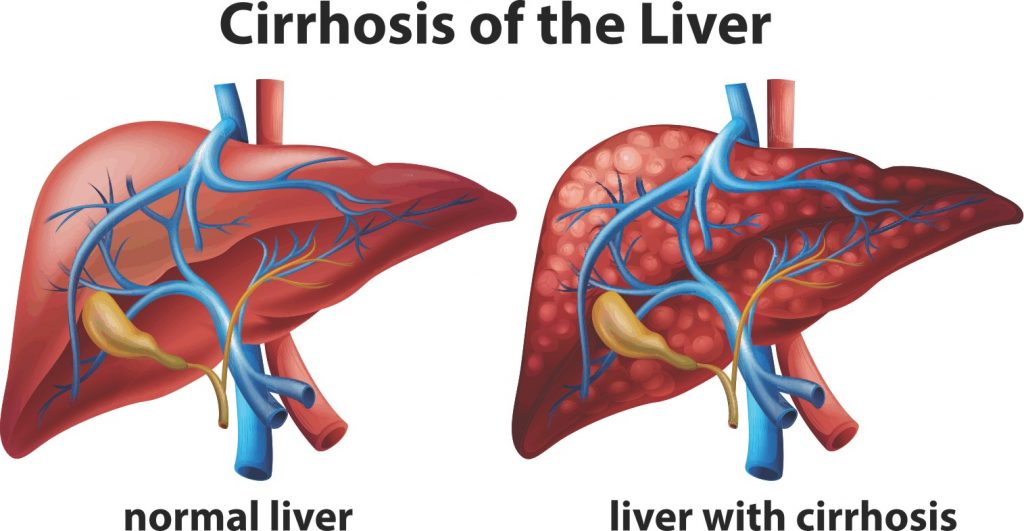 Cirrhosis is fundamentally defined as the degenerative disease in which the normal cells are replaced by the scarred tissues. This mostly occurs as a result of long-term damage to the liver that may happen either due to excessive alcohol abuse or chronic hepatitis. The scarred tissues obstruct the flow of blood to the liver, hence slowing down the liver function to process nutrients, hormones, drugs, and natural toxins. The terminal stages of liver cirrhosis may eventually lead to chronic liver disease.

According to a report, nearly 4.5% to 9.5% of the general population that includes adults are affected by liver cirrhosis.

There are several possible causes that have the potential to turn into liver cirrhosis, most common being alcohol and viral hepatitis.

Alcohol liver cirrhosis – The repeated and excessive use of alcohol for a long time can cause alcoholic liver disease. This may be noticed a decrease in the alcohol tolerance in drinkers. They also tend to suffer from severe hangovers than normal as the liver damage increases.

Genetic disorders– Some genetic disorders also create certain circumstances that lead to liver cirrhosis. For example, Wilson’s disease is a genetic deficiency which inhibits the body’s ability to metabolize copper. Consequently, the excessive amount of copper accumulates in the liver and other organs and destroy the tissues.

Also in hemochromatosis, the body absorbs excess amounts of iron, that causes damage to the liver. This is more common in men (in the age of 40-60) than in women.

Additionally, some infants are born with the deficiency of galactosemia, which is an enzyme needed to digest the milk sugar, galactose. Consequently, the milk sugar accumulates in the liver that may lead to the liver cirrhosis. This may be fatal if not treated on time.

Primary Biliary Cirrhosis – This is a progressive liver disease in which a buildup of bile is created in the liver that results in damage to the bile ducts that drain the bile from the liver. Eventually, excessive pressure is created that destroys the bile ducts, hence causing liver damage which ultimately leads to liver cell death.

Some of the other causes that may lead to liver cirrhosis are as follows:

At initial stages of cirrhosis of liver symptoms may include:

At a progressive stage, the signs may include:

What are the complications of liver cirrhosis?

The treatment of liver cirrhosis is commonly done in India. Most of the best Gastroenterologist in India prefer to do the liver transplant for this condition.

Other than these, the radiology tests are also conducted such as:

Other than the liver transplant, the doctors also treat the patients for the symptoms and complications that occur due to the condition such as

India is a hub for medical tourism and provides several complex treatments at an affordable cost. Some of the best hepatology hospitals in India are well-equipped with world-class technology and modern devices. The liver transplant cost in India is quite reasonable due to which a number of patients across the globe prefer to come to India for the surgery.